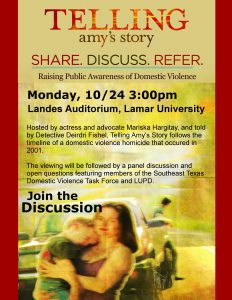 Hosted by actress and advocate Mariska Hargitay, and told by Detective Deirdri Fishel, the film Telling Amy’s Story follows the timeline of a domestic violence homicide that occurred in 2001.

The viewing will be followed by a panel discussion and open questions featuring members of the Southeast Texas Domestic Violence Task Force.

CEU credits for social work will be offered.

Visuals: Discussion panel including prominent members of the Southeast Texas Domestic Violence Task Force will take open questions from the audience regarding domestic violence in our community and what we can do to prevent it.